Back when I was trying to start a tech blog, and just after Google announced support for foldables, and even before Motorola was getting in the game, I was already thinking about the next flip-phone. Now with a new version of Samsung Galaxy Fold, a highly-anticipated dual-screen phone with Microsoft Duo, and a Motorola event happening today, where should we expect this trend to go?

FOLED – which just means adding “folding” to whatever OLED means, is a term I remembered hearing on the Discovery Channel as a teenager in the early 2000’s. I remember seeing concepts about folding screens for TV’s or projectors, and even TOLED (transparent OLED) being used on windshields. It took more than 15yrs before we finally saw actual products that used these technologies. But are they any good?

I for one have never held a folding-screen device in my life. Judging from what others say, and pictures and videos that I have seen, I feel like it’s a trend that is slowly creeping in though. A famous tech personality even uses a Samsung Galaxy Fold, and actually boasts liking the product enough to be his daily-driver. The foldable phone is already out there, but its not in the hands of people who want to give it a shot.

One factor that slows that progress is the price. A normal smartphone already costs around half of renting an apartment (or in some cases the full rent). Adding another screen, a bigger battery, and I would assume “new” features too, that price is really going to go up. If a foldable-smartphone would go down to the price of an affordable Android, I believe there is nothing that would stop the regular-Joe from picking one up. In the event that these technologies would be considered part-of-the-norm, it’s very likely that it’s going to start rolling out more.

Love it or hate it too, there is also the factor of Apple, and what they think of it. From experience, Apple has never really started a trend, instead, they wait, and when the time is right, they go on the offensive with a certain kind of technology. Will Apple eventually try and go into the whole foldable-trend? Having just release a new 16″ Macbook Pro, it seems like it’s not in their radar as of yet. They do have other things to worry about as well, like a non-breaking iPad Pro, the new MacPro desktops, and maintaining their lead in the wireless-earbuds market with AirPods. But the iPhone is their flagship, their money-maker, and their inlatable-lifesaver, and if they’re not on-board to get the iPhone to fold, that’s another huge chunk of the population not getting into the new tech.

If foldables of today fail to get even the most hardcore techies, or a even just a small niche of Android users, then the idea would just die. So far, folding-phones have had a good run – Nobody is really that mad with Samsung (how can you be mad at foldables after the whole Note fiasco), and everybody knows the technology is in its infancy. It would take manufacturers, more than developers in my opinion to get the ball rolling. Why? Because smartphones, like any other gadget today, is an accessory, something to make you look cool. If plastic screens, and creases on the screen is where it all ends up, then it won’t even be fun to make ads for those. It. Won’t. Sell. Plain and simple.

For now, I can only dream of a slim, and clean form-factor, no creases on the screen, and just would look and feel like a regular smartphone. That’s why I built one using Cinema4D and Element3D. As you can see in the render above, this is my ideal folding phone:

– Notification Screen when folded. Think smartwatch size screen on the back.

– More Cameras and Sensors (being that this render is over a year old, as a Pixel user, I didn’t even think of doing more cameras)

The technology, and even the experience is all new and would take quite some time to mature and actually be useful. Who needs a folding phone? Nobody can answer that, because back then, nobody even thought they needed a smartphone. What can we expect to see on the turn with this new technology? What can we see at the river? I can’t go all-in just yet – so for now, I’ll just fold.

Let me know in the comments below if you would like to see a tutorial of how to create a 3D foldable in Cinema4D, Element3D and After Effects. Also let me know what kind of features you want to see in a foldable.

I moved from Mac to PC.

I moved from Mac to PC. It’s been over a decade since I left my Vista-turned-XP HP computer to collect dust. Since then, I have owned two Macbook Pros, an entry level one and another fully spec’d. And both have proven to be very reliable and lasted way longer (and powered through way more renders) than I could have imagined. I put those laptops to WORK and for years they’ve been my trusty slaves. I had a good long run with my Macs but as I stared at the spinning color wheel of death one night, I knew—- it was time for an upgrade.

There is that thing we call “age”. One definition is a number that refers to how old something/someone is. The other, refers to a particular period in time, and in this case, the Age of Good Macs has passed. I have fallen back into the hands of Bill Gates. And as I gaze into this brand new Windows [PC], dreams of better render times and seamless scrubbing are now at my fingertips. See how I built my latest workstation… and you know the drill – like, subscribe, and help me kick-off this YouTube thing.

A few months ago I had the opportunity to work on some singalongs. Since I love karaoke, I immediately said yes. But it wasn’t doing a cool version of Bon Jovi’s Bed of Roses that I was doing. Instead I had the honor of working on a release of Elf, not a musical, but a really funny Christmas movie that’s always a blast during the holidays. This time, it was adding some cool singalongs as well as other graphics popping in-and-out of the movie. Being a comedy more than a musical, it gave us the opportunity to play around a little bit with how we approach it as a sing-along, or in this case, a Sing & Cheer-Along. 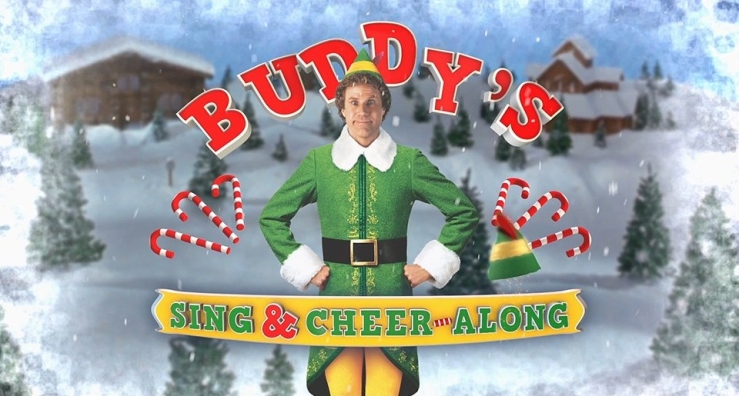 Using Buddy’s hat as the main bouncing-element, I got to play around with making it come to life using After Effects. The actual lyrics would’ve looked really good in 3D, that’s why I opted to use Video-Copilot’s plugin, Element3D to create the lyrics. This gave me the ability to control everything, and animate the singalong all in After Effects. With Zooey Deschanel’s character singing, I used her hat for their Baby It’s Cold Outside duet in the movie. It was really fun but at the same time really hard to animate all the overlapping lines in the song.

Overall, the mix of playful animations and having it interact with the movie made this singalong project a real treat. It felt like I just gave a cool gift to an already great movie.

Immediately after this project, I hopped on to a similar one, but this time with a new movie called Smallfoot. If you haven’t seen it, I can guarantee it to be a blast. A funny and unique take on the Yeti’s point of view and how people are in regards to mysterious creatures. For this particular project though, I got to explore more designs and bouncing elements for each song. Using emojis and other elements from the movie, it was very easy to get creative especially with the catchy songs. I’ll be a movie-critic this once and say it’s actually better than Frozen.

Like Elf, aside from just doing insane singalongs, I also got to play around and incorporate the graphics into the movie itself. This method seemed to be really working well as your attention goes from singalong to movie, and it all works seamlessly.

Using Element3D, I created the 3D snowball, and used it throughout the mowvie, bouncing in between scenes and lines from the singalong. It was another great way to do some fun and unique compositing. At this point, I was getting the hang of the timing and generally have a good feel of how singalongs work.

Fast-forward a few months and my producer got a green-light from Warner Bros. to make another singalong, but for this time, for a movie that is tried and tested, and had one of the catchiest songs in 3D animated-movies. Everything was awesome at this point!

So from doing 2 movies and all the songs in those, plus some more compositing and motion graphics work, it felt like it was good to start with those, because now its getting crazier. Still looking at Element3D as my main tool, this was the perfect opportunity to do some wild things with the plugin, and just take this whole singalong journey to a whole different level.

Too many things I got the chance to play around with. Bouncing coffee-cups, morphing Lego Queen to Batman – this was starting to get better, but at the same time, renders are getting heavier and heavier.

We were very fortunate to work with the animators of the movie as they provided some of the 3D models of the characters. The problem was, they had their own system of how they used these models, so for most of the bouncing elements, we created our own 3D elements using Cinema4D while we figure things out. Luckily with Lego, we are only dealing with blocks, but since these are well-designed toys, we had to get our measurements and modeling right.

By the time I had to work on the last song, I finally managed to get the main character, Emmet, rigged and set-up for animating in Element3D. The extra steps to get it working in Element3D worked great because like I mentioned before, I didn’t want to be switching between Cinema4D and After Effects. Having the ability to control everything in After Effects made everything easier in the long run.

3-movies, and probably close to an hour-worth of 3D animated singalongs later, I think I accomplished something that easily got out of hand. It got out of hand in a good way – I used methods that nobody in their right mind would do, and it all turned out unbelievable, super-cool, outrageous and amazing. Such a phenomenal, fantastic and so incredible experience. Woo-hoo!

These songs are burned in my head now. If you want to have the same catchy songs stuck in your head, or would want something for the kids, please do check out the new release of Elf, Smallfoot, and Lego Movie 2 and check out the singalongs!